... but then I think back: I so hated social studies in the lower grades and then history in the higher grades that it was palatable. I dreaded the classes. My projects were always turned in late. I barely passed some tests. The B or C on the report card drew everyone's eye every time.

It turns out that I really did hate vegetables too!

It was years and years later before I discovered that I had some appreciation for either.

Maybe it's heretical to say in some circles, especially from one of their own, but I think it's perfectly okay to hate math! Embrace your hate! Scream and shout! Pull your hair and stomp your feet! And once you wear yourselves out and settle down to catch your breath, then that's the time to let it go and to look a little deeper...

Maybe more so than any other subject---yes, I am slightly biased---mathematics claims an incredible breadth of subject matter that at first glance may seem completely unrelated and, thankfully, so much of it has almost nothing to do with numbers at all! And those different areas have people actively experimenting and researching, expanding the field everyday!

Arithmetic---adding and subtracting, multiplying and dividing, over and over and over again---is an infinitesimally small part of what is mathematics, but it is the first thing that we point toward and label "math" for our children.

If I told you "vegetables = don't leave the table until you finish that bitter broccoli," you might never discover the taste of sweet corn... That would be a shame. You might even pass that experience on to your own kids.

My wife once complained that my daughter was zipping through a worksheet of addition problems---but she was doing them "wrong." I watched my daughter and saw what she was doing: she was doing a few digits on each problem before completing any one. She had deduced the intent of the lesson---what the worksheet was meant to drill. She found the underlying pattern and exploited it, knocking out the page in no time flat!

I smiled. While her arithmetic was not getting any better, she was certainly doing math!

At the dinner table the other night, I asked:

(1) Suppose we take all of the counting numbers---1, 2, 3, ...---and make two piles of numbers, the odds and the evens. Would one pile have more numbers than another? [Correct answer: No, they have the same amount of numbers.]

(3) If they're the same, let's shuffle the odd pile back into the even pile. Now does it have more stuff than the all numbers pile? [Correct answer: "No, they're still the same."]

(4) Someone else asked: "Are there different kinds of infinity?" [Answer: Yes, there are---some are bigger than others.]

Like homeschooling, it's about finding the teachable moments. But it does mean having some understanding of what math is. Then you can learn that you like most vegetables, even if you dislike broccoli.
Posted by Unknown at 12:26 AM 1 comment:

Threat!
One poised to attack with two.
Your move, Buddha...
Posted by Unknown at 12:00 AM No comments:

Universe in a Grain of Sand

The Self that speaks its mind
The Self that hears the echo
Sitting at a table
Sharing a cup of tea.
Posted by Unknown at 11:28 AM No comments: 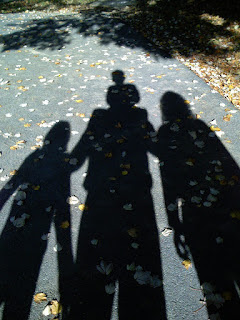