Injustice of Rain
"I wanted to play outside!"
Form a committee...
Posted by Unknown at 8:26 AM No comments:

The ultimate teachings of Aikido, Zen, and other disciplines (including religions) is, in some sense, a universal Emptiness or Nothingness. It is amusing then that we empower and then become slaves to organizations that purport to be the Keepers of Nothing, the authorized Teachers of Nothing, the Certifying Authorities and Graders for Your Understanding of Nothingness, and so forth.

How is it that we become slaves to Somethingness in our pursuit of Nothingness?

AikiWeb has a thread entitled "Who will protect the innocent?" The author cites the politics, the inequities, and the injustices within Aikido's various Temples of Understanding. He suggests that one major organization should step in to police its own.

Here was my response. Hopefully it is relevant to more than just Aikido:

Who will protect the innocent... from what? An organization?

Is to what O'Sensei's Aikido points truly locked in time and space in some permanent form, like a shrine to be tended to by high priests? Who is the guardian of mushin?

It is not the way of Aikido to be bound---physically, mentally, or spiritually. What power can any organization run by man hold over one who practices the Way? What is the true meaning of takemusu?

Wherever you are, whatever your circumstances, be free.

Buddhist Geeks, Episode #69, is part two of a discussion centered upon the new American Buddhist teachers. There is a fundamental question at the heart of the exchange: whether or not a nontraditional teacher can be a legitimate teacher.

As a homeschooler, I have some insight. Here is my response, which should be applicable well beyond Buddhist tradition:

Eternal Truth---all that is pointed to by the Buddha-Dharma---is independent of time, place, language, and culture. It exists whether or not it is acknowledged. It is all around us and it is us. It does not have to be integrated into our lives, and it does not have to be recreated by every generation.

To a skillful teacher, every situation---time, place, culture, circumstance, and so forth---presents a gateway, an opportunity to point to the truth. That teacher moves freely everywhere knowing that the dharma knows neither holy nor unholy.

Labeling the practice of a particular time, place, culture, language, tradition, and so forth, locking it in time and clinging to it, is worshiping an idol, killing the Buddha. It is the greatest insult to the teachings you wish to preserve: Impermanence.

Yet, what allows this delusion at all?

Posted by Unknown at 7:12 PM No comments:

Do You Hear It? 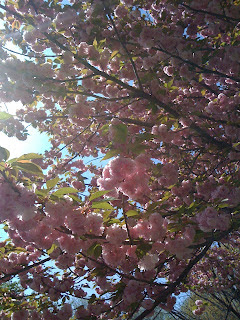 A tree in full bloom:
Blossoms sing God's Symphony
of Eternal Truth.
Posted by Unknown at 10:44 PM No comments:

"I believe in harmony, you idiot!"

I have Google Reader set to do a standing query for blogs that mention Aikido. I appreciate when people speak about Aikido in their own words, revealing how the practice of this martial art affects each person individually.

Consider this excerpt from the posting Aikido: The Peaceful Resolution of Conflict:

The point is, there is always a way to achieve peaceful resolution in all conflict - in everything from terrorism to inner city gangs. Of course, when you have moronic idiots in charge of countries (like George W. Bush), it seems like an impossibility. Morihei Ueshiba, possibly the most prolific and powerful warrior who ever lived (besides Miyamoto Musashi), thought that harmony was the answer to every problem. Think about that. The baddest of the bad found a way to defeat any opponent without killing them. His teachings have had the most profound influence on my personal philosophy.

I respect your religious views but do not judge me for having different beliefs.

I recently got in an argument in the middle of an Aikido class. This Christian guy refused to practice ki breathing techniques because ki is not mentioned in the bible. He told me that ki was the devil’s working…hahaha!

I have learned to not get mad and to treat others with kindness and love through martial arts. Whatever path you choose in life, may it be one of peace and love:)

What might O'Sensei, Aikido's founder, say about this particular understanding of Aikido? I do not presume to know the mind of the master, but I suspect: "More practice..."

Many of this blogger's postings focus upon building a blog, so perhaps his intent is to incite and inspire commentary. You can judge whether this is sincerity or sensationalism.
Posted by Unknown at 9:38 PM No comments:

Dozens of clergy preceded Pope Benedict XVI as he closed the mass at St. Patrick's Cathedral in New York City. Beside him were men in dark suits with conspicuous lapel pins and earphones, talking into their sleeves in Secret Service style. Their biggest responsibility in this non-eventful procession seemed to be to intercept nuns of the Missionaries of Charity---the order founded by Mother Theresa---as some reached into the aisle toward the pontiff for his attention.

In a massive, beautiful cathedral filled with riches, nuns who work in some of most impoverished and desperate of worlds reach out to find some special if only momentary attention from the man in the fanciest of vestments who is visiting from his palace in Rome, who would soon depart up Fifth Avenue in his specially modified Mercedes "Pope Mobile." [See Matthew 21 and the original Zechariah 9:9 for contrasting imagery.]

In terms of godliness, what does the Pope have that the nun does not that creates such a disparity? What is lacking in her that she feels she must beg for his attention? What does the Pope have such that he requires protection from her? Can the gap be closed with only a word, a glance, or a touch?

Man's capacity for spirituality and faith are a wonderful things, but they are much too easily perverted. You must ask yourself: Are you not already complete? Is God not already fully realized within you? What do you suspect can be found outside of yourself?
Posted by Unknown at 1:35 PM No comments: