Studying Aikido *and* Other Martial Arts? 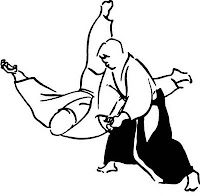 There is a longstanding question in Aikido circles asking whether it is appropriate to study another martial art while studying Aikido.  Whether the source of the question is a want to correct perceived deficiencies in the art, or whether there's simply an opportunity to train with another teacher who is doing something different, or whether it's something in between, the answer can ultimately be clearly found within the Aikido practice itself right in front of your eyes...

Year after year, practice after practice, technique after technique, repetition after repetition, the Aikido student alternates between the practice of Uke and the practice of Nage again and again and again.  If the practice of Aikido was only that of Nage--the performing of the throws and pins--and the role of Uke was simply that of a dumb attacker making mistakes to be exploited or that of an actor making Nage look good on the mats, then yes, it is easy to say that another art interferes with progress in Aikido.
But is Aikido strictly the art of the Nage? 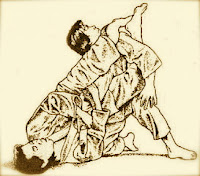 It is certainly a draw, particularly to those of the "martial effectiveness" core, to think "I want to learn to throw someone like that!" Even among longtime practitioners, who hasn't completely overlooked the skilled Uke upon seeing the flawless execution of a new technique or variation?  It is tempting to see the art of the Uke as ancillary, a practice in deliberately doing things wrong, giving up one's center, being off-balanced, and so forth.  With extreme separation in the roles, learning to be an Uke is perhaps the incidental cost of learning to be Nage.
Whether there is this bias toward being Nage or whether at the other extreme there is a concerted effort to perfect the role of Uke, we are not yet performing Aikido.  Rather, we are studying two separate arts that are diametrically opposed...
... and certainly you cannot perfect being Nage while being Uke, right?  And how could you perfect your ukemi while being Nage?
Is the question so different than asking "How can you perfect Aikido while studying Karate?"
Somehow, though, through practice after practice, we do begin to master both the roles of Uke and Nage on the way toward perfecting our Aikido.  How? 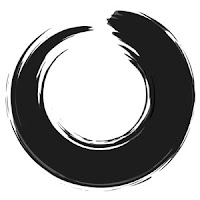 What we are learning, the Aikido itself, in no small part lies in the awareness of when we are centered and when we are off-balanced, when we are leading and when we are being led.  It is in feeling the intention impulse that precedes an attack and in feeling the impulse that precedes a defense.  The Aikido study leads us to understand that it is the ability to fluidly move between controlling and yielding that moves us toward a desired outcome harmoniously.
The opposed constructs of "Uke" and "Nage" are teaching tools, creating an imbalance to study it.  When you assume and hold the form of Uke, you perform like this; when you assume and hold the form of Nage, you perform like that--two completely separate arts in conflict.  Ultimately, though, the roles of Uke and Nage dissolve and the realization of the Aikido practice begins.
[Inspired by the AikiWeb thread, Learning from Other Arts.]
Posted by Unknown at 11:55 PM

As a cooperative uke you must yield and follow which are key characteristics of being an effective shite.