Ten years ago, my wife, my four-year-old daughter, and my one-year-old son--still crawling--had an offer in on a house. Its price was, as was the convention, about three times my government salary, which was just barely adequate to support my stay-at-home, homeschooling family. By the end of the year, the house would be ours, and our one car's head gasket would blow. I would take on teaching at the local community college to help make ends meet and to make payments a second used car.

Nine years ago exactly, I formed a company on paper. Eight years ago it was on contract. Seven years ago I was taking my family for a weeklong vacation--the type of thing we had never done in years of military and government pay--driving a fancy car, and we were browsing larger houses in the area. Six years ago, it was clear that respecting the doubt to buy larger was a sensible choice.

Four years ago around this time, we'd just received my son's diagnosis of Duchenne Muscular Dystrophy. He was still walking and climbing the steps, albeit with some difficulty. I was working for a group with questionable ethics and was content to lose my job at the end of the year.

Two years ago around this time, I was in Baltimore with my son, visiting and speaking with their firemen who would be working the MDA's Fill the Boot campaign. On the drive home, I called my wife. She had received notice of the bank's intent to foreclose.

Three days ago, a large tree in the backyard toppled on the house's roof. The two bathrooms upstairs were crushed and the tree lay over the roof covering my son's bed, the stairwell, and the front door. Tomorrow we have a previously scheduled appointment to hear about household medical equipment for my son, necessary upgrades given that he cannot walk. We drive the same two used cars, the fancy one long gone. The contract I currently work is scheduled for recompete.

Around this time maybe twenty-five years ago, I stood on the WTC observation deck overlooking the city. Twenty-one years ago joining the Army as a linguist, I had no idea I'd be learning Arabic when Desert Storm broke out. Around this time fourteen years ago, after working a project in this industry as a mathematician, I confessed to my wife and toddler daughter--who was just learning to crawl--that I didn't think that this work was the right path for me. I had no idea where I would be or how I would be involved ten years ago and then subsequently.

Today I am still here, but I am not the same.

While a "War on Terror" or "Unrest in the Middle-East" have served as a touchstone or backdrop for almost my entire, post-"Evil Empire" career, they--like the car, the house, and anything else--ultimately had little to do with the transformation itself. Whatever the backdrop, there was just the living and the choices.

So many choices, individually and collectively, led us all to this moment. Without conscious, awakened action, certain paths were probably predictable. Even with the momentum of habit, beginning right now we can all move in a new direction. For me, it starts here, listening to the rain falling on the tarp above where my bathroom and roof were.

Email ThisBlogThis!Share to TwitterShare to FacebookShare to Pinterest
Labels: InexhaustibleThings

I've received the automated notice that--unless I intervene--on 14 September, the SwordMountain.org domain will be renewed and my credit card will be charged accordingly, allowing for yet another year of opportunities to finally say something meaningful. 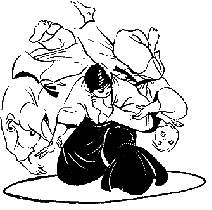 I can tell you that, from an occasional peek at the statistics, I may be the site's primary reader; still, there are a few who pay attention or find me in search against my advice to the contrary. A few of those will engage in a conversation or drop by for discussion. A few of those will stay for some practice. One way or another, though, everything is changed--if for no other reason than I am changed.

Ultimately, is Aikido or Zen practice, or anything else in life, any different from this?

Ninindori: Today, I stand still and open my arms. My recollections of my past seize my left; visions of my future seize my right. Am I still free? Aikido and Zen. Mind and Body. I do not know...

The instructor shatters the silence: "Hajime!!!"