Approaching you in the hallway, walking in the opposite direction, I offer "Good morning."
What if I offer "Good morning!" with a bright smile?
And if I asked "Good morning?" with some hesitation, might you wonder why your day is off to a less-than-stellar start? Or maybe you wonder what I've heard that you haven't?
Maybe it's more illustrative to ask how you saw the one who asked? Was I a friend, a stranger, or a foe? What if I preemptively tell you that I was greeting my friend walking behind you in the hall.
... or should I point out that we're not actually walking toward each other in a hall right now at all.
I throw the ball; the dog retrieves it. Before I ask if you like being my dog, I'll ask what color was the ball? Before you answer, though, ask yourself "How would a lion respond?"
Are you looking for clever things to say to show that you understand the point? There's no need. The universe constantly invites us to show ourselves and we respond in kind. But what do we invite?
Perhaps today we will invite the very best in each other and in ourselves to step forward and respond.
Posted by Unknown at 8:02 AM No comments:

Only Me, All of the Time

"Since I've been here, I attend these different meetings and I get the feeling they're selling me bullshit," he confided in words approximating those. "So why are you the only one here I hear questioning all of this?"
It was one of several encounters yesterday that made me think twice and gave me some hope.
We'll see where it leads...
Posted by Unknown at 8:27 AM No comments: 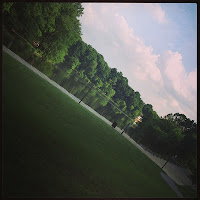 This sanctuary of mine is in fact a public place -- something that generally makes it all the more enjoyable. If I'm not walking the two-mile path around the lake, I'm sitting on a bench with my mandolin, playing and watching the people passing by. Often it's my decompression stop between the office and home, ensuring I leave the former behind.

Now school is out and all of the kids are out to have some fun. I see younger ones with mom or dad at the tot lot; I see some fishing; I see some tossing a baseball; I see some riding bicycles; and just parked beside me, I see three young teens with Subway sandwiches and the most foul, racist, homophobic mouths I could imagine--mostly because of their ages. They went through the catalogue of the people they had in common and gave loud commentary about the passers-by. The gays, the blacks and the KKK, the Jews and Auschwitz, the disabled, the deaf, the blind, the obese,  ... on and on and on.

The benches beside the tot lot were within earshot, but I was the only adult in the immediate vicinity. Quite honestly, my immediate want was to beat them senseless since the people otherwise assigned to that task were obviously not doing their jobs. Instead, I put my recorder visibly on the table and started to quietly play my mandolin...

Two of the three went on, oblivious or unfazed I do not know. One kid was clearly concerned and embarrassed. When the first two spotted openings on the swingset, they bolted and left their belongings behind, leaving the third to figure out what to do.

The open table next hosted picnic with extended family including grandmother and some little children who danced around fascinated by the mandolin.

A box labelled "Give What You Can." A bin labelled "Take What You Need." What's inside them?
You may think they're silly questions and dismiss them out-of-hand, but there's a reason I'm asking, a lesson to be learned--and not necessarily the obvious one.
In my beginner's aikido class, we begin with a few techniques from katatekosadori, the "cross-arm grab." Everybody in the aikido world is familiar with the invitation to cross-arm grab: an extended arm, palm open, inviting the attack as a beginning to a finishing technique. To a stranger in a western culture, it's an invitation to shake hands, an invitation to friendship.
To a more experienced practitioner, extending the hand this way is an invitation to show your intention. Does the other smile and shake hands, or grab and proceed to attack? It's very clever, but it's problematic: The experienced practitioner operating this way transmits doubt and suspicion in offering the choice, perhaps inviting attack--perhaps suspecting attack. Little does she know that this is an attack in itself.
The polished practitioner realizes there's only one reason to extend the hand this way...
Posted by Unknown at 8:48 AM No comments:

Standing in front of the lecture hall, I heard the discussion and the question that made it quite clear that the student simply did not understand the concept.

How many variations would I try? To what lengths would I go to have this student grasp the concept? How much time would I take from other students and from my own work to see this through? Would it be because of my own dedication to teaching? Would it because I was being evaluated as an instructor through the class' grades and teacher evaluations? Or maybe there's simply a latent desire in everyone to be understood?

Regardless, as a teacher standing before the students, a parent directing your child, a subject matter expert explaining the need for a particular course of action, you have knowledge and experience to convey that the others may not be prepared to accept or to understand. Reputation is on the line! When your unstoppable force encounters that immovable object, what happens? Do we blame the student, saying that the student is a fool or even that the student is purposefully resisting the lesson? Do we not blame a particular student, but instead rationalize that not everyone will get it and this is just one of those someones? Do we begin to doubt the material itself, wondering if it might not be valid at all if no one will accept it? Do we begin to doubt ourselves, questioning our reasoning or even our ability as teachers?

What are the consequences of one course of action over another? And while we're wondering what to do, what is not getting done?

There's lots of fertile ground here for exploration in future posts. Do you have examples from your own experience to share?

Posted by Unknown at 8:45 PM No comments:

Live long enough and you will eventually find yourself at the crossroads...

One time, someone asked me to consider the prevalence of bridges in the road system, even between your home and the office. Having spent some of my youth around New York City, I had a fairly certain notion of what a bridge is, so naturally I thought "none." "Think again," I was instructed. "Next time you drive to work, watch for them."

He was right. They were everywhere.  Not the super-sized architectural wonders necessarily, but the nondescript sections of road passing over other roads, streams, and so forth. It's kind of amazing, really.

So, what about the crossroads?

Oh. You were thinking I was talking about something else, yes? Those challenging, major decision points in your life? Actually, I was. Somehow, when I want to describe the feeling that I'm at one of those points in my life, the word "crossroads" and associated images that are attached to that feeling for me appear. Then, if you and I are "on the same page," you get the sense of what I'm communicating, right?.

Back on point. We all find ourselves at the crossroads from time to time. I bet you have several examples, as well as stories from either side: standing there before them and looking back and seeing how your life was effected. I'd bet we could sit back with a bottle to share, exchanging our stories all evening. As the sun rose, we'd concur we'd find more crossroads ahead.

Triggering an imaginary drive from home to the office, I see the more mundane crossroads passing by. I wonder how many there really are, how many I've never noticed before. I don't know that's the safest way to drive though... might miss the exit. It might be more useful to watch for all the signs around us that keep us pointed in the right direction.

Have you noticed the new tab near the top of the page? Some folks have been asking about "Zen Storm" lately, so I thought to give a little insight so we start on the right foot. It's an eternal work in progress, so watch for updates and let me know your thoughts.

Posted by Unknown at 5:03 PM No comments: