The Carthusian's Cell. The Buddha's Mind. 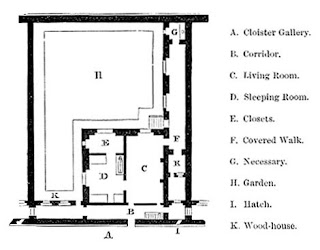 As a Catholic school graduate, I was well-versed with different religious orders, but I have to admit that it was a recluse trying to leave a dark past behind, that introduced me to the Carthusians.

Drew MacLane was compelling to me, as was his description of the Carthusian life: priests living largely as a community of hermits ~ living individually in spartan "cells," each with a place to sleep, a place to pray, a place to study or work, and an individual garden inside high walls. Three times per day they gather together for common prayer; otherwise, they are alone, holding individually to a common schedule and tended to by a second order of brothers who deliver the meals to their cells and so forth.

And it was David Morrell who introduced me to Drew MacLane in his novel, "The Fraternity of the Stone." David Morrell was a prolific writer, probably best known for "First Blood" and a few others introducing the character, Rambo. I raced through this paperback and many others while in the military maybe five or so years after its release ~ keeping my mind occupied in some idle, alone time in the pre-Internet Era. While there's little I remember about any of this novel in particular ~ let alone any of the larger collection I left to the unit's day room on my departure from the unit ~ the character and the Carthusians stuck with me.

Arguably, there was a thread in my father's life that was unfinished, and arguably that thread repeated itself in my own ~ though we branched in different directions. My father was studying in the seminary to become a priest when he injured his back. In pre-Vatican Council II days, that injury was sufficient to disqualify him from selection and ordination, and he diverted to a life married with children instead. Similarly, while in college, I considered turning toward the life of monastic priesthood ~ contacting different orders by ordinary mail, including an order of orthodox eremitics living in a desert hermitage, but when my father died my own life detoured, first to the military where my own back injury diverted me once again, this time toward a life married with children.

On the advent of social media, I used to use the tagline "failed hermit," but the words didn't quite convey what I sensed entirely accurately: I wasn't a failed hermit for having a family anymore than I was a failed father or husband for sensing a draw toward spiritual or solitary life. If I was one, I'd failed at the other; so, how could I reconcile these thoughts of who I am and maintain some semblance of sanity?

It seems kind of silly, no? Thinking of how best to explain, a cool breeze blows through the screen door; which one of me zips up the the sweatshirt?

Maybe it's enough to leave it at that. Most of the time it's sufficient. I mean, if a karate student asks what the proper aikido response is to an attack, I might just kiai ~ or maybe laugh? Maybe whack him with my jo staff... Maybe hold out my hand? Bow? Who knows... There are so many ways to point to that one point...

... but is showing that one point the actual answer in that moment?

Where is that cool breeze when you need one?

What state can you not be moved from? What state do you always return to? What life will hunt you down while you seek refuge here? When you're free to be anyone, who are you? And when you see who you are, will you accept it?

Experiencing one point? That is one way... So tell me, have you experienced all of the ways?

While I sat in a building on a mountainside facing a blackboard contemplating a theorem, half a world away in a temple a shaved head faced the wall and held a koan, and elsewhere a parent traded in the marketplace to ensure a child had food. No matter how large one's consciousness or how rich his reality, mind has little more than a place to sleep, a place to pray, a place to study or work, and a garden to tend.

For now, I'll set aside my staff, laugh, bow, and extend my hand ~ after my 4am tea and prayer outside by the garden. After all, the breeze is calling.

“Real poetry, is to lead a beautiful life. To live poetry is better than to write it.”
—Matsuo Basho

Other people's words take on lives of their own. Thanks, Rick :-)